The people behind the wine.

John Conover joined PlumpJack Winery as general manager in January 1999 to oversee the daily operations of the estate winery and vineyard, provide strategic direction for the newly-established property, steadily increase production from 1,000 cases to 10,000 cases annually, and create the image, awareness and global distribution channels that would ultimately support that level of production.

The critical and fiscal success of PlumpJack Winery ultimately inspired the purchase of a new 54-acre property on Howell Mountain. CADE Winery, founded in 2005 by partners Conover, Gordon Getty and Gavin Newsom, is nestled against dramatic slopes at an elevation of 1800 feet. The grapes grow in soil characterized by mountain ash and minerals, and the temperatures provide the perfect conditions for ripening, producing grapes with balance and density.

From the outset of this new endeavor, the partners were committed to building CADE as the first Gold LEED-certified estate winery. “No one had ever attempted this, even the contractors, so the responsibility fell to us to develop a completely original plan,” says Conover. “We used everything from recycled concrete to insulation made from blue jeans. We incorporated solar panels to minimize the amount of electricity we use on the premises and utilized renewable cork flooring. We also made the commitment to be extremely careful with water use. Since it’s opening, CADE has served as a model for those seeking this level of green building, from UC Davis to other private winery ventures,” Conover concludes.

With CADE’s success mirroring that of PlumpJack’s, the three partners were open to a third winery when the opportunity to purchase an historic property in Stags Leap was presented in the fall of 2011. Soon thereafter, in February 2012, they founded Odette Estate. Odette, which spans 45 acres and is currently in the late stages of development, will also be Gold LEED certified and farmed organically. The winery’s first vintage, a 2012 Cabernet Sauvignon, will be released in February 2015. Early critical reviews of this wine are hinting that Odette will follow in the footsteps of its celebrated siblings.

Of his partners, Conover says, “I’m exceedingly fortunate to have had the opportunity to develop these properties alongside Gordon Getty and Gavin Newsom. We share an absolute passion for these three properties, our wines and our people. This level of alignment can be very rare and it is the foundation of our success.”

Conover spends time at each winery each day. “Running wineries isn’t something one does remotely,” he says. “It’s an agricultural business and requires a feet in the soil approach to management. It’s also a very human business and that means spending time with the people who are the bedrock of our organization.

On the topic of what makes him eager to start each new day after 30 years in the wine business, Conover credits the team. “Not a day goes by that I do not acknowledge what an honor it is to work with our winemakers: Aaron Miller at PlumpJack, Danielle Cyrot at CADE and Jeff Owens at Odette. These are among the best, brightest and most passionate individuals in the business. Their talent and level of commitment to their craft and their teams make me proud beyond words.” And,” Conover concludes, “I think anyone who’s been to any of the three wineries would agree that our hospitality team provides experiences that are nothing short of magical.” 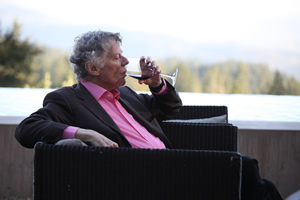 Composer, philanthropist, and entrepreneur, Gordon’s role in our collection of wineries has directed some of our boldest endeavors, including our use of screw cap technology.

The music of the American composer Gordon Getty has been widely performed in North America and Europe in such prestigious venues as New York’s Carnegie Hall and Lincoln Center, London’s Royal Festival Hall, Vienna’s Brahmssaal, and Moscow’s Tchaikovsky Hall and Bolshoi Theatre, as well as at the Aspen, Spoleto, and Bad Kissingen Festivals. In 1986, he was honored as an Outstanding American Composer at the John F. Kennedy Center for the Performing Arts, and he was awarded the 2003 Gold Baton of the American Symphony Orchestra League.

Getty has recently devoted considerable attention to a pair of one-act operas, Usher House (derived from Edgar Allan Poe’s The Fall of the House of Usher) and The Canterville Ghost (after Oscar Wilde’s tale). The former will be premiered in 2014 by the Welsh National Opera. Getty’s first opera, Plump Jack, involving adventures of Shakespeare’s Sir John Falstaff, was premiered by the San Francisco Symphony in 1984 and has been revived by the Los Angeles Chamber Orchestra, BBC Philharmonic, and London Philharmonia, among other ensembles. In 2011 the Munich Radio Orchestra and an international cast conducted by Ulf Schirmer performed a new concert version of Plump Jack, which was simulcast on Bavarian Radio and released in 2012 by PentaTone Classics. The same label is preparing the release of Usher House, with Lawrence Foster conducting the Gulbenkian Orchestra Lisbon.

Getty, who studied at the San Francisco Conservatory, has produced a steady stream of compositions since the 1980s, beginning with The White Election (1981), a much- performed song cycle on poems by Emily Dickinson. It has been recorded twice — by Kaaren Erickson for Delos and by Lisa Delan for PentaTone — and has been performed in Lincoln Center’s Alice Tully Hall and the Morgan Library (in New York), the Kennedy Center and National Gallery of Art (in Washington, D.C), and the Hermitage Theatre (in St. Petersburg, Russia), among many other venues. His three-song cycle Poor Peter (2005) was included by Lisa Delan and pianist Kristin Pankonin on their PentaTone recital And If the Song Be Worth a Smile, which features songs by six contemporary American composers.

Poetry from the nineteenth and early-twentieth centuries has often inspired Getty in his vocal compositions. His choral works Victorian Scenes (1989, to texts by Tennyson and Housman) and Annabel Lee (1990, to a poem by Poe) were premiered by the Los Angeles Master Chorale and Sinfonia at the Dorothy Chandler Pavilion. Michael Tilson Thomas led the San Francisco Symphony and Chorus in Annabel Lee in 1998 and 2004, on the latter occasion also premiering Getty’s Young America (2001), a cycle of six movements for chorus and orchestra to texts by the composer and by Stephen Vincent Benét. Joan and the Bells, a cantata portraying the trial and execution of Joan of Arc, has been performed widely since its 1998 premiere, notably in a 2004 revival in St. George’s Chapel of Windsor Castle, under the baton of Mikhail Pletnev. In 2005, PentaTone released a CD of Getty’s principal choral works up to that time, performed by the San Francisco Symphony Orchestra and Chorus (Michael Tilson Thomas conducting) and the Eric Ericson Chamber Choir and Russian National Orchestra (conducted by Alexander Verdernikov). Getty has recently completed choral works based on Keats’ La Belle Dame Sans Merci, Hans Christian Andersen’s The Little Match Girl, and an original poem that he modeled on Masefield, The Old Man in the Night. He has written a new setting of the traditional text Hodie Christus Natus Est for children’s chorus or women’s chorus accompanied by chamber ensemble, and is currently expanding that into a triptych of similarly scored Christmas pieces.

Although most of Getty’s works feature the voice, he has also written for orchestra, chamber ensembles, and solo piano. In 2010, PentaTone released a CD devoted to six of his orchestral pieces, with Sir Neville Marriner conducting the Academy of St. Martin in the Fields, and in 2013 it followed up with a CD of the composer’s solo-piano works played by Conrad Tao. Currently in preparation is a PentaTone CD of his chamber music, which will include a string-quartet version of his Four Traditional Pieces, a work that was performed in a string-orchestra arrangement by Nadja Salerno-Sonnenberg and the New Century Chamber Orchestra in 2012. Other recent performances of particular note featured his ballet Ancestor Suite, which in 2009 was given its premiere staging, with choreography by Vladimir Vasiliev, by the Bolshoi Ballet and Russian National Orchestra at the Bolshoi Theatre, Moscow, and was then presented at the 2012 Festival del Sole in Napa, California.

Of his compositions Getty has said: “My style is undoubtedly tonal, though with hints of atonality, such as any composer would likely use to suggest a degree of disorientation. But I’m strictly tonal in my approach. I represent a viewpoint that stands somewhat apart from the twentieth century, which was in large measure a repudiation of the nineteenth and a sock in the nose to sentimentality. Whatever it was that the great Victorian composers and poets were trying to achieve, that’s what I’m trying to achieve.” Getty’s music is published by Rork Music. April 2013 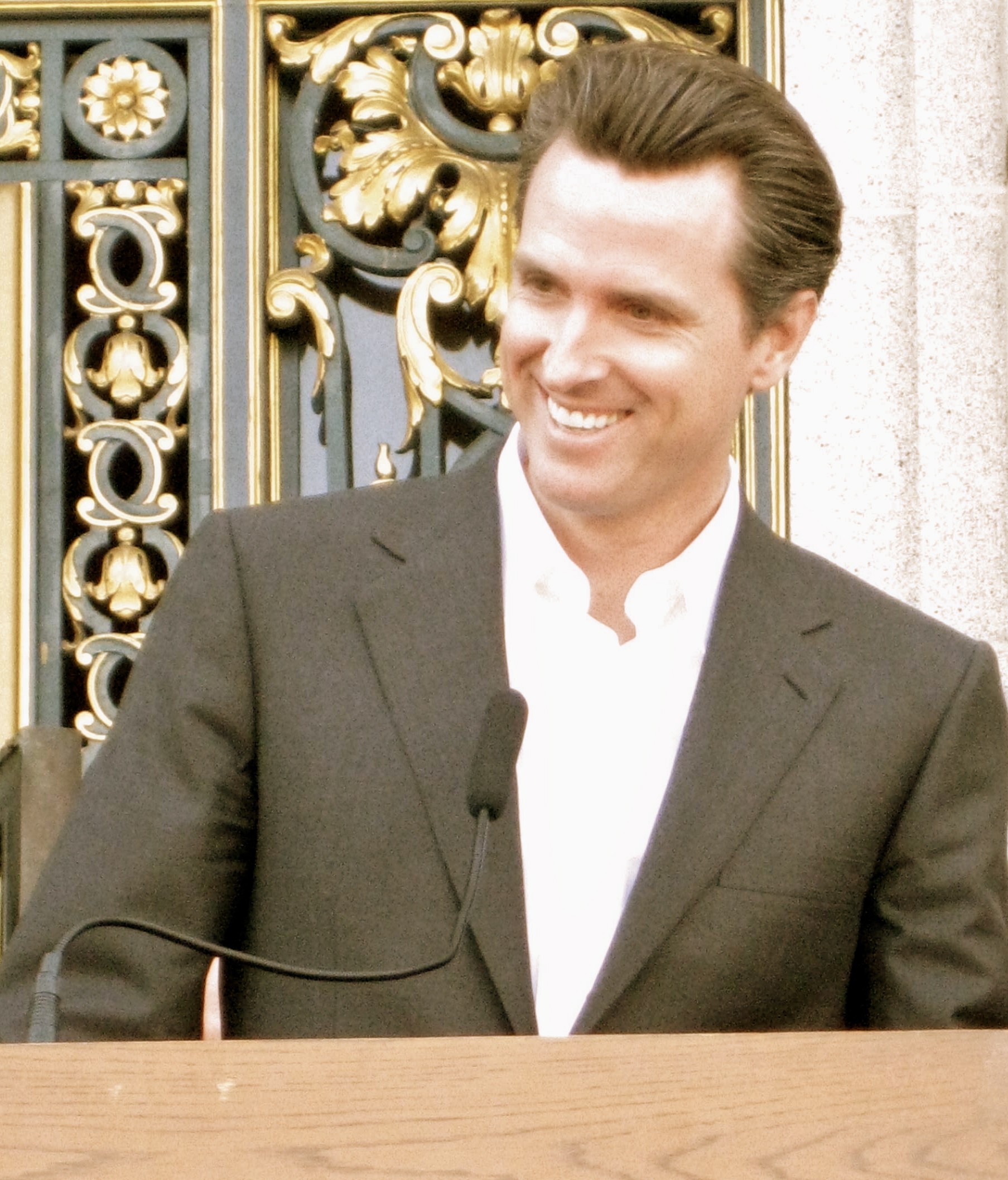 In 1992, Gavin Newsom opened his first business, PlumpJack Wines, combining his passion for wine and his driving entrepreneurial spirit. Over the next decade, the PlumpJack Group began to grow under his leadership to include many of the restaurants, wineries, and retail establishments in the current portfolio. In 2003, Newsom was elected the 42nd Mayor of San Francisco, and in 2019 was sworn in as the Governor of California. He lives with his wife and First Partner, Jennifer Siebel-Newsom, along with their four children in Sacramento, California.

For more information about Gavin Newsom, visit his website GavinNewsom.com.